A DRIVER study was undertaken on data from the Lone Star zone to evaluate DRIVER’s ability to: autonomously reproduce spatial models of enriched gold zones that compare well to gold models generated using conventional orebody modelling techniques; decrease the time required when using conventional modeling techniques by providing insight as to directional continuity of the gold content; and to enhance the understanding of geochemical patterns and actionable orebody knowledge to support continuing exploration.

DRIVER was able to recreate extents of the block model with a high degree of accuracy, with elevated gold zone wireframes generated using ordinary kriging normal scores transformed gold data. The anisotropy autonomously assigned by DRIVER very closely resembles that of the spatial models defined using conventional modelling methods to generate the preliminary block model of the Lone Star zone (Figure 2) and was able to do so within less than 24 hours, a significantly decreased time frame. DRIVER was also able to calculate the local anisotropy of the other 36 elements given within this same 24-hour period, which produced interesting geochemical anisotropies and zonations to be evaluated as potential pathfinder elements.

How does DRIVER work?​

DRIVER has several stages of analysis that result in robust, spatially coherent 3D volumes of enhanced concentration for each element in the dataset. The process begins with a novel approach to determining directional continuity in 3D space called “Spherical Continuity Mapping”. This process maps and scores every direction in a sphere for directional continuity for a particular numeric variable (typically geochemical values). The result of this data-driven analysis is either one global anisotropy ellipsoid that represents the optimal result for the whole dataset, or a series of local anisotropy ellipsoids if the dataset was partitioned and evaluated locally (Figure 3). After each variable has been evaluated and provided an anisotropy ellipsoid, an interpolated block model (either inverse distance weighting or ordinary kriging) is created that respects the anisotropy of each variable.

The interpolated block model is then evaluated by a different novel algorithm that combines spatial statistics and geostatistics to identify regions in the data that have both high concentrations and are spatially correlated with other samples of similar concentrations. This “zone” analysis precludes the need to cap values or remove outliers, as the algorithm does not produce 3D wireframes for regions of isolated outlier values due to the lack of spatial correlation with their neighbors.

Once the zones have been created for each element in the dataset, an “overlap analysis” tool enables the user to compare every possible combination of any number of the element zones. Additionally, uploaded wireframes from other data sources can also be compared to the zones generated in DRIVER.

Using DRIVER on advanced projects can assist in understanding a wide array of exploration and mining challenges. Numeric modeling of elements in 3D is an expertise and time-intensive task. DRIVER drastically cuts the amount of time required to generate robust 3D models and enables the user to run each element in parallel. A user can evaluate the directional continuity, create block models, and automatically generate enhanced zones in under 30 minutes for a full 51-element suite. Until DRIVER, geologists would never investigate each element this way, as the time required to evaluate and process each element would not be feasible. Fast and easy generation of robust analyses for each element enables a geologist to better understand alteration and exploration vectors, multi-element proxies for mineralization and grade, geometallurgical zones, and potentially deleterious element regions that would affect the profitability of a project.

The close agreement between DRIVER’s model extents and anisotropy with that of the manually created block model strengthens the confidence in the current understanding of the gold distribution at the Lone Star zone. As the gold distribution defined by DRIVER proved to be in close agreement with that of the block model, the spatial distribution of several other metals was taken into consideration to aid in quantifying the relationship between gold and pathfinder elements. Previously, pathfinder elements at Lone Star were qualitatively understood; however, a combination of Principal Components Analysis (PCA) using ioGAS software, the local anisotropy of the pathfinder elements provided by DRIVER and its Overlaps Analysis tool helped this understanding become more quantitative.

In this study, PCA suggested a chemical relationship between Au, Ag, Te, Se, Pb, Mo, Bi, As, Hg, and Sb. The stereonets of the local anisotropy axes provided by DRIVER indicated that Au was most strongly spatially correlated with Ag and Te, as the orientation of the model axes are most similar. Conversely, stereonets of Pb and Mo model axes indicate the weakest spatial correlation with that of Au, as stereonets of Pb and Mo model axes indicate a greater occurrence of alternate directions of anisotropy (Figure 3). Elements Se, Bi, As, Sb and Hg were moderately spatially correlated with Au and also Pb and Mo, sharing similarities with each.

Using ioGAS software, a Gauss transformation was applied to the geochemical data to most closely resemble the distribution of data used in DRIVER. In samples with elevated Au contents, samples which also contained elevated Pb and Mo were filtered from the data set to evaluate their influence on the correlation between Au, Ag and Te. When samples with elevated Pb and Mo were removed, the correlation between Au, Ag and Te was significantly increased, suggesting a potential alternate fluid event with elevated base metal contents which also contained some amount of Ag, Te and lesser Au. This may also be observed in the stereonets provided by DRIVER, as a weak secondary trend in the anisotropy is shown. It is likely that both fluids could have contained varying concentrations of Se, Bi, As, Sb and Hg as they are correlated with samples that contained both elevated Au and base metals. This information provides insight as to the geologic environment of the mineralization system and may further explain the alteration styles also observed at the Lone Star gold deposit. 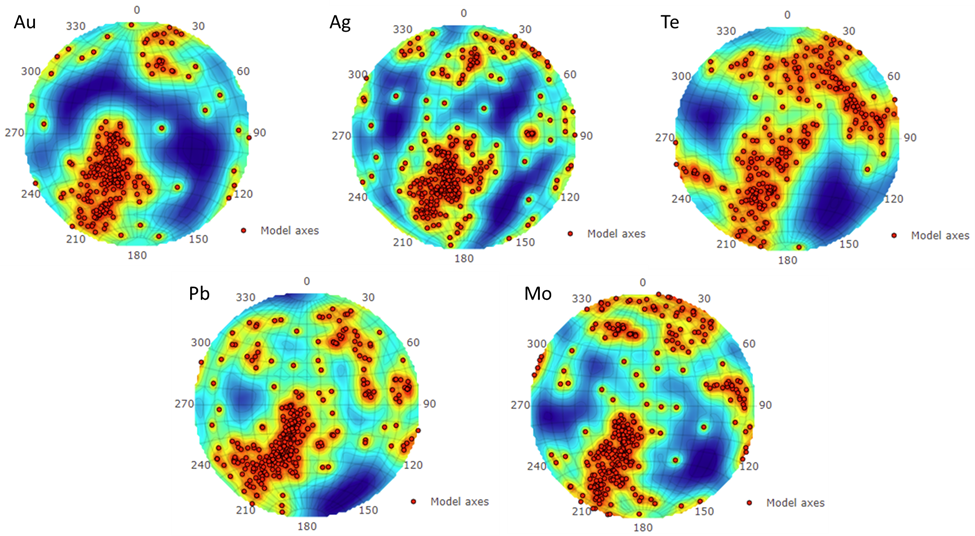